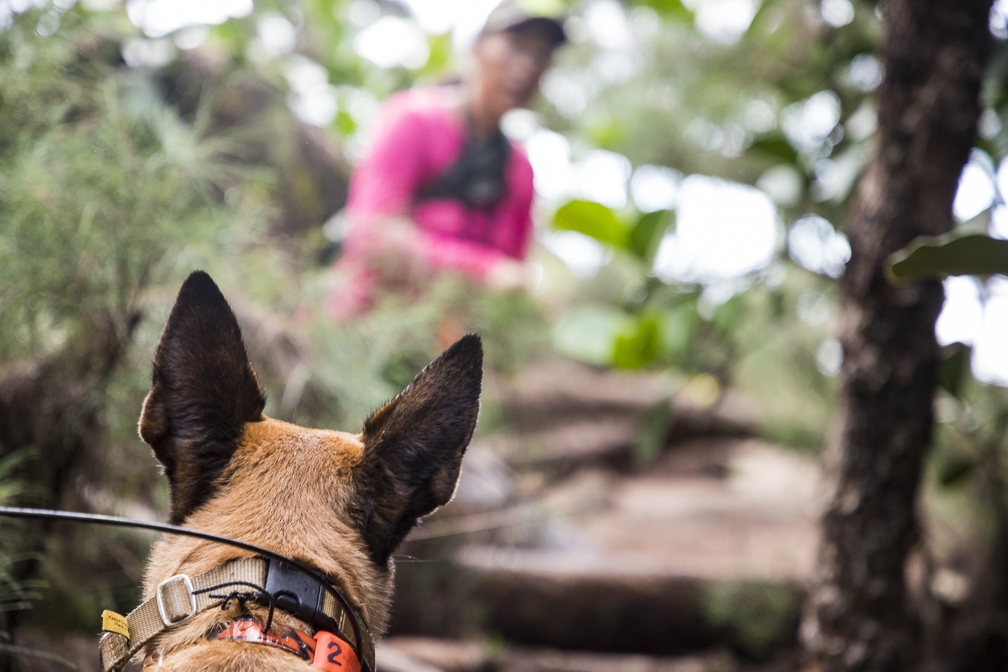 After about 50 minutes of searching and sniffing on and off a trail in Pupukea on the North Shore of Oahu, Qana, a 4-year-old Belgian Malinois, found his first invasive plant of the day.

Qana is one of many dogs owned by a number of owners who volunteer their time to Conservation Dogs of Hawaii, a Honolulu-based nonprofit founded by Kyoko Johnson.

Qana was trained by Johnson and her owner and manager, Roberta Bitzer, to detect chromolaena odorata, otherwise known as devil’s weed, for its fork leaf pattern. This noxious weed is ranked number 23 on the list of the world’s 100 worst invasive species and has a high score on Hawaii Pacific’s Weed Risk Assessment, which ranks plants based on habitat, distribution and history.

Hailing from Tokyo, Johnson is a professional dog trainer specializing in eco-friendly scent detection. She moved to Hawaii nearly two decades ago and first established CDH in 2016. Johnson originally wanted to train dogs to detect cancer, but then changed focus and started a pilot project in 2019 in teaching them to detect devil weed.

She has worked with nine other dogs – the oldest of which is 6 years old – and their owners. Dogs are at different stages of training. Qana is one of the three most experienced, while Johnson’s 8-month-old black Labrador Zephyr, the youngest, is familiar with the scent but has yet to participate in fieldwork.

Although the noxious pest can be toxic to dogs if eaten in large quantities, Johnson said CDH dogs do not try to eat it. They’re too excited to get their reward for locating the invading plant. It also helps that devil’s weed leaves have a distinct turpentine smell when crushed that even humans, who have 295 million fewer smell receptors than dogs, can smell.

Devil’s weed can quickly overgrow its surroundings and reach a height of 4 to 6 feet. Native to North, Central, and South America, devil’s weed was first detected by the Oahu Army Natural Resources Program in 2011 at the Kahuku Motocross Track in Oahu. The program then alerted the Oahu Invasive Species Committee. It has since been found in Kahana Valley, Pupukea and Aiea.

Erin Bishop, outreach coordinator for the Oahu Invasive Species Committee, said that because the Kahuku motocross track also serves as a training area for the military, the most logical theory is that the pesky seeds devil’s weed hitchhiked on military hardware, likely from Guam due to heavy military traffic. Bishop added, however, that the discovery on the trail was not necessarily the original introduction, as no one can say for sure how the plant got to Hawaii.

Since World War II, Guam has been plagued by a series of invasive species such as devil’s weed and the coconut rhinosaurus beetle, which was first detected in Hawaii in 2013 at Joint Base Pearl. Harbor-Hickam during a routine survey by the Hawaii Department of Agriculture. .

A pathway analysis conducted by the U.S. Forest Service in 2015 identified imported live plants as the highest risk of introducing pests and diseases to Hawaii. Invasive species committees are still working hard to block other species, like the brown tree snake, which has devastated Guam.

The weed was also detected on a motocross track on the Big Island in early 2020, according to Franny Brewer, acting program manager for the Big Island Invasive Species Committee. The committee, after hearing about CDH’s success on Oahu with devil’s weed, awarded the organization in May with an innovation grant from the Hawaii County Department of Research and Development.

Brewer said that in addition to crowding out native species, devil’s weed has two particularly negative aspects: it contains a chemical that makes the plant extremely flammable even in the absence of dry conditions, and it is toxic to livestock, such as cattle and horses.

Qana, together with Bitzer and Johnson, was dispatched to several locations on the Big Island where the committee believed devil’s weed might grow. Bitzer said these were the best three weeks of Qana’s life.

The process of training dogs like Qana, Johnson explained, involves classical conditioning. “It’s kind of like Pavlov’s dog where they salivate when they hear the bell associated with food,” Johnson said. “So instead we pair the target scent, which in this case is devil’s weed, with their food or toy reward, the one the dog wants to work for, and they start looking for that target scent. as if it were their food or toy.”

Although some dogs prefer to be rewarded with a high-value snack, Qana’s most coveted reward is a plastic frisbee.

Johnson said that while many dogs, such as Chihuahuas and French Bulldogs, have a good sense of smell, they lack some of the key traits for this type of work, including physical stamina, confidence, work ethic, and more. hard work and good social skills.

Qana embodies all of these qualities. After two hours of sniffing and being dragged in different directions when the wind changed course, according to the GPS tracker built into her collar, Qana had covered five miles and was still full of energy.

For the most part, Qana’s nose drove her off-road, leaving Bitzer no choice but to race down steep, pathless hills. But the dirt stains and pine needles on Bitzer’s clothes were a small price to pay, as Qana found five more Devil’s Grass plants.

Bitzer grew up on the outskirts of Rio de Janeiro and has rescued more strays than she can count, but said she never felt the connection she now had with Qana. “It’s unbreakable…by doing this kind of training, you really learn to understand your dog and your dog understands you,” she said.

Instead of barking, which could be considered disruptive, Qana is trained to alert Bitzer by circling the area, trying to point her nose, or looking back and forth between Bitzer and the area where she has detected a plant.

Qana is also trained to sit close to the plant, and while it’s obvious she’s trying, she’s just too excited, knowing she’ll be rewarded if she’s right. And more often than not, it is.

Each time Qana correctly locates an evil plant, Bitzer rewards her with her frisbee. Then, while Qana is busy playing, Bitzer removes the plant by carefully digging it up from the roots, and documents its location and whether it has matured. If so, its flowers drop seeds that can further aggravate its spread, and Bitzer or a member of Oahu’s invasive species committee will return for new plants.

In addition to working with Qana, Bitzer is also the canine leader of the Coconut Rhinoceros Rhinoceros Response Team and works with U.S. Department of Agriculture-trained dogs to find the beetle’s breeding sites. .

The dogs were also trained to sniff out the scent of Ohia’s quick death and Covid-19. Most recently, Johnson was deployed with Rudi, a year-old yellow Labrador, and just returned from Maui after helping search for coqui frogs.

Johnson, who has always loved dogs and thought of them as “fur children,” said she didn’t realize how their abilities and instincts were underutilized. Training dogs to detect scents has given her enormous appreciation. She is proud of what they have accomplished over the past three years and hopes to continue building local capacity with dog and handler teams.

“No matter how much I accomplish, I always feel like there’s so much more to do! I think conservation is just like that – the work never ends,” Johnson said.

Sign up for our FREE morning newsletter and face more informed every day.