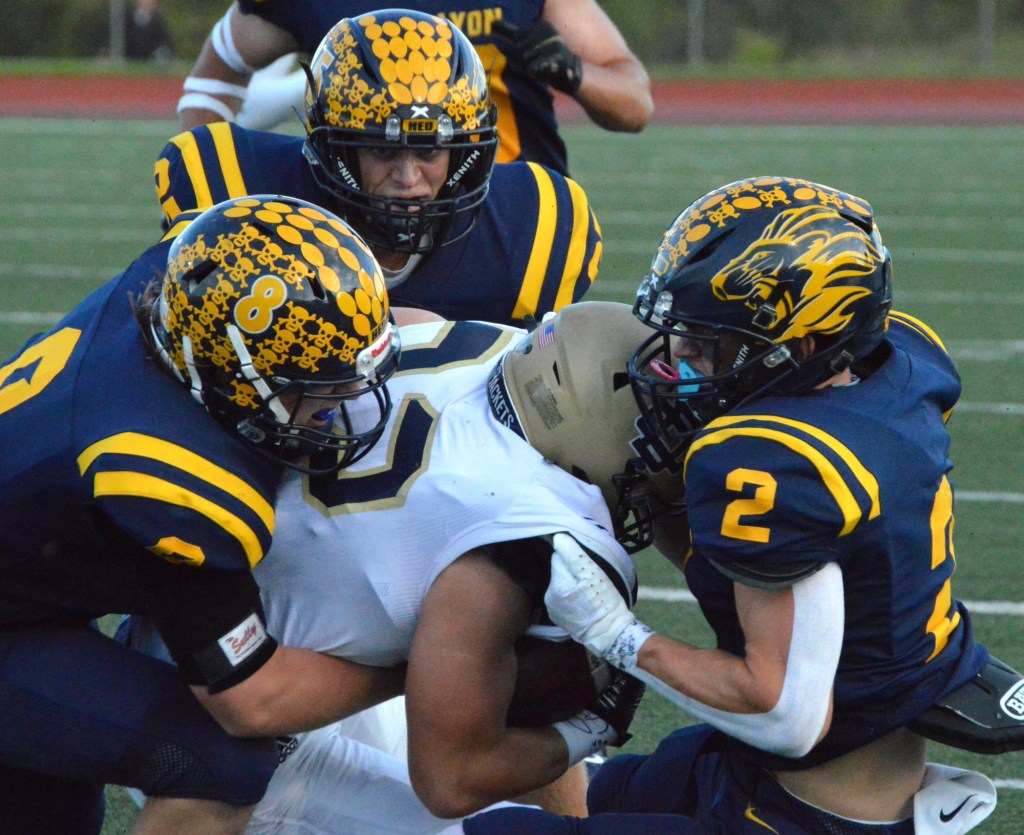 Alright, now Kosmo knows what it’s like to be a yo-yo.

One week it’s down, the next week it’s up, then back down. One week the string inexplicably comes loose, making you start all over again…

Anyway… let’s not dwell too much on last week’s record.

Kosmo can feel the cold weather coming, so let’s wait another week or two, before it gets cold, damp and dark…like Kosmo’s cave.

Week 4 is next, and there are a bunch of great games, as the league contenders start to sort themselves out.

Here are Kosmo’s picks for Week 4 of the 2022 regular season:

Berkley (1-2, 1-0 OAA Gold) at Auburn Hills Avondale (1-2, 0-0 OAA Gold) – These two teams were expected to be the main contenders for the new OAA Gold Division before the start of the season, and Kosmo has no reason to believe otherwise. It will just be a matter of who can get bigger plays from their big play guys, Savod Daniels for the Bears and Cooper Voeffray for the Yellow Jackets. Kosmo says: Avondale.

Birmingham Brother Rice (1-2) against Warren De La Salle (3-0) at Wayne State – Kosmo spies tell him this was the week Nolan Ray was planning a return to the field after a knee injury, and the Warriors – who are coming off a good win over Woodhaven – can certainly use that to counter any the weapons pilots can throw at you. If he uses all that pent up energy and goes wild, Rice could make a big statement here. Still, the DLS is damn good… Cosmo says: Of the room.

Waterford Kettering (0-3, 0-2 LVC) at Walled Lake Northern (0-3, 0-3 LVC) – Kosmo knows this one won’t have much of an impact on the Lakes Valley Conference run, but he just wanted to pick it because he loves to say “Zarek Zelinski.” The security and enlargement of the stud has been a bright spot in recent seasons for Kettering, and Division I coaches have taken notice. The captains come into the game on a seven-game skid, dating back to last year, and yet haven’t beaten the Knights in six straight tries, so perhaps Kosmo is sticking to tradition. Either way, someone’s leaving. Cosmo says: North.

Troy Athens (2-1, 0-1 OAA Blue) at Birmingham Seaholm (3-0, 0-0 OAA Blue) – The RedHawks got off to a good start under new coach Tom Cook, before faltering last week. It’s still a big game in the OAA Blue, though, as neither side wants to fall too far behind two weeks down the line. Seaholm is yet to play a division game, but started 3-0. Kosmo doesn’t know much — hush! – but getting the ball in the hands of someone named Kinnie seems like a good game plan. Cosmo says: Seaholm.

South Lyon (2-1, 2-1 LVC) at Detroit Country Day (3-0) –Last year’s emphatic 31-7 win over Country Day in Week 4 was kind of the warning horn that rang across the state that the Lions were on the hunt. South Lyon is doing great after this year’s Week 1 stumble, but the Yellowjackets have also been on a mission, beating small school powerhouses in Detroit Loyola and Warren Michigan Collegiate. It’s a battle between team n°3 in division 5 and team n°8 in D2. Cosmo says: Country day.

Rochester Adams (2-1, 0-1 OAA Red) at Lake Orion (2-1, 1-0 OAA Red) – Kosmo spies tell him Adams boss Tony Patritto was NOT happy with the way the Highlanders played defense in last week’s loss to Clarkston, so you can bet the D has new wrinkles prepared to apply to young Lake Orion QB Tristan Hill. It would, however, be a golden opportunity for Chris Bell’s Dragon team to announce their presence in the red race with authority. Cosmo says: Adams.

Detroit Catholic Central (2-1, 0-0 CHSL Central) vs. Detroit UD Jesuit (1-2, 0-0 CHSL AA) — Do not hesitate to choose your poison. Do you want Evan Haeger to pass you quickly or Spencer Lyons to crush you? Oh, you gonna stack the box and watch DJ Lee and Brady Blakita get the better of your defense? This also works for Big Blue. Cosmo says: Central Catholic.

Novi (2-1, 2-0 KLAA West) at Brighton (3-0, 2-0 KLAA West) –Junior Caleb Walker hosted a coming out party in Week 3, throwing for 408 yards and six scores in the Wildcats’ win over Salem, setting up an early showdown with the “Dogs for supremacy in the KLAA West.” Novi won last year’s battle, ending an eight-game losing streak in regular season games against Brighton (Novi won in the 2016 playoff meeting), but it’s hard to win in the Dog Pound. Still, Kosmo has a hunch… Cosmo says: Novi.

South Lyon East (3-0, 3-0 LVC) at Walled Lake Western (3-0, 3-0 LVC) – Well well well. What do we have here? A showdown in the LVC? The results weren’t necessarily there for Jacob Topp in a three-win Year 1 at East, but the process never changed, and now the Cougars are off to their first-ever 3-0 start. Still, Western is where every Kosmo spy expected them to be — atop the league standings and top 5 in the state in D3 — and the Warriors are here to serve. a reason. And, to… uh… to top it off, East has never beaten Western in six tries, and Kosmo is a big believer in tradition. Cosmo says: Western.

Clarkston (2-1, 1-0 OAA Red) at West Bloomfield (3-0, 1-0 OAA Red) – Is it really an official football season without a key clash between these two in the OAA Red? Kosmo doesn’t think so, but will check with decision makers. He will also check to see if the defense has been restored in the OAA Red after a few weeks of wild and woolly results. If Wolves can straddle the legs of Ethan Clark and Mike Hein for ball control, like Kosmo spies said they did in the second half against Adams, and they can keep that explosive Lakers attack going on the sidelines, it could get interesting. A huge ‘show me’ game at the start of the Josh Pintar era, Kosmo thinks. Kosmo also thinks the Lakers are ranked No. 3 for a reason. Cosmo says: West Bloomfield.